We had a great Branch Christmas party this week! It happened in Tabwakea,
where we live, which is about a half hour drive from Banana, our branch (we don't
have a church building in Banana yet.) So we loaded the whole
branch (almost 100 people) into a van and two trucks! SO PACKED! There
were about 8 people standing in the back of the truck I was in, and
maybe 15 sitting on the ground, with a couple more of us sitting on
the sides.

And I realized (when I say realize, I think it was the Spirit talking) that that's what God has
for us too. He loves each of us. Individually. And not just "God loves
EVERYBODY," but each and every SINGLE one of us. And like a lot of
other things on this mission, I guess that was something I knew
intellectually before, but  it never really sunk in until that moment,
when He gave a little bit of that love to me. It was a glorious thing,
and I had a total spiritual afterglow for the rest of the night.

The next day, I had the opportunity to baptize Teiniku! He's this 10
year old kid whose dad is stone drunk all the time. When we met him at
the store to pick him up, his dad was passed out in front of it. And
his mom was busy with something, so she couldn't come, and his grandma
came. This kid has a pretty tough life, and he is the single shyest
person I've ever met. When we started lessons, he would not talk. But
Elder Wells and I started playing games with him, earned his trust,
and eventually, we were able to teach him, and even have conversations
with him!

And after the baptism, he bore his testimony! It was quite
the process, took him about ten minutes to say "Mauri, Tariu ao
mwaneu. I ataia bwa e boni koaua te aro aei. N aran Iesu Kristo,
Amen." With me up there next to him, encouraging and helping him, but
he got it. I was so proud of him! The branch president said that he
could sit down, and I told him he could sit down, but he stayed up
there and stuck it out! And the next day, seeing him at church, he was
grinning from ear to ear. Love that kid!

So I'm learning, I'm growing, I'm feeling the Spirit, and I'm loving
to watch people change their lives for the better! Watching and
helping. It's a glorious work!


We got a very short letter and several pictures this week.  So here is the public part of his letter.  He had mentioned Captain Cook, so Sharon asked him about it, and here's his response.  [The pictures are below.]

Captain Cook story! Basically, we've been looking for a house in
Banana, but it's hard because we have to have pretty extensive
accomodations (which are the bare minimum anywhere else) and Banana is
a really poor area. So, I had the brilliant idea to try the Captain
Cook Hotel, a place mostly for American and Australian fishermen,
which thus has extensive stuff. So Wells and I strolled in like we
owned the place, asked to talk to the manager, and I basically ran
this business negotiation like a top dawg. And later we had to bring
in Elder Anderson because I can't actually commit to spending money,
but I totally had the idea and opened the door and drove it to make it
happen! So right now we're waiting on a meeting of the board of
directors to approve us.

It looks like Spencer's got a little bit of his old man's taste for real estate negotiations.

Here are the pictures: 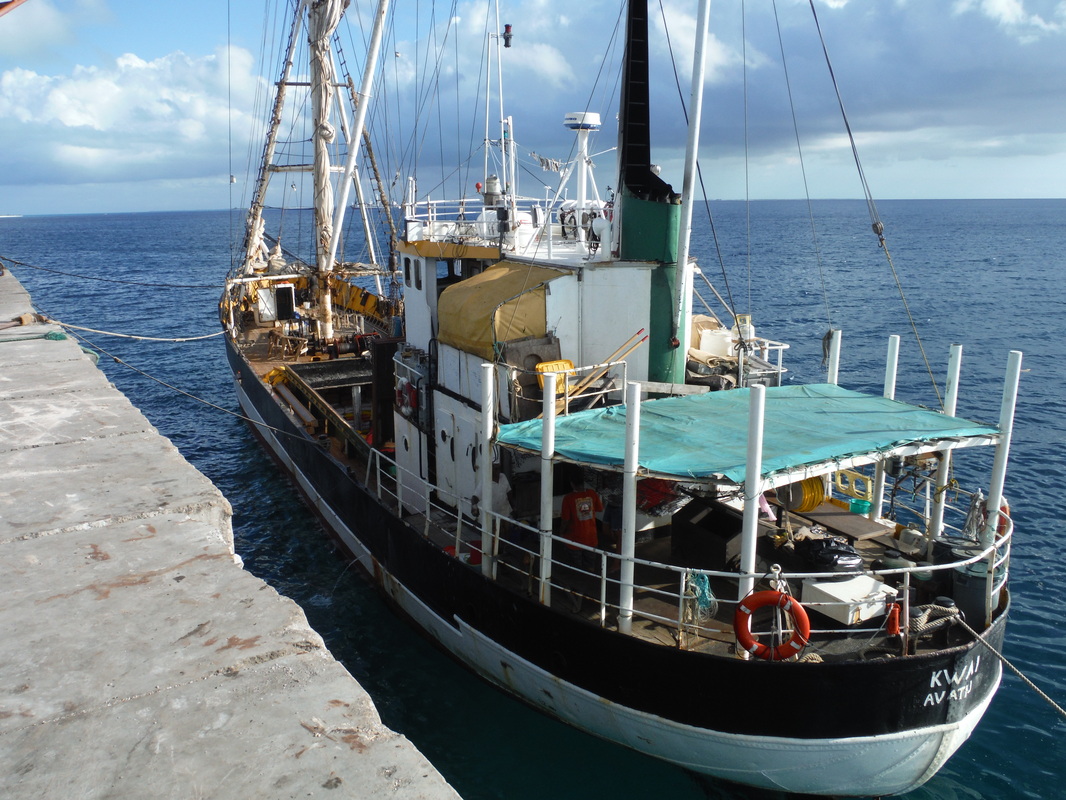 This is the Kwai, the boat Spencer took to Fanning (over 200 miles away).  A couple days in high seas was quite an adventure on this vessel! 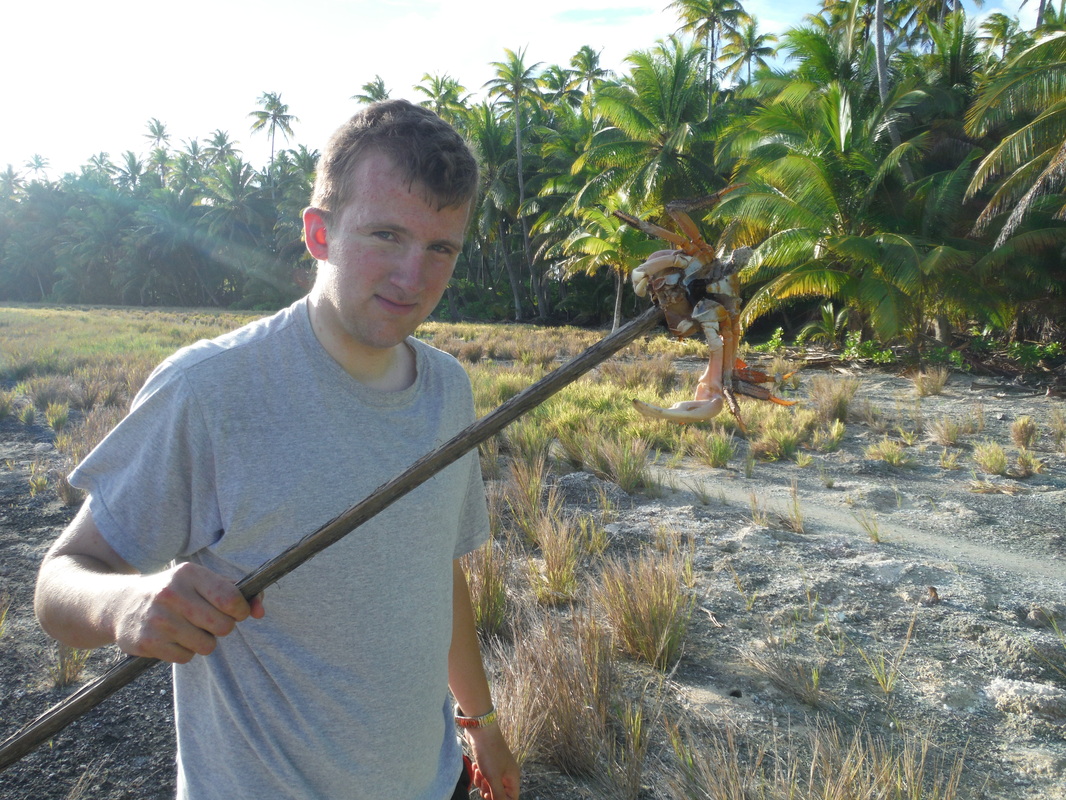 Spencer always thought of himself as a back-to-nature man.  This picture proves it. 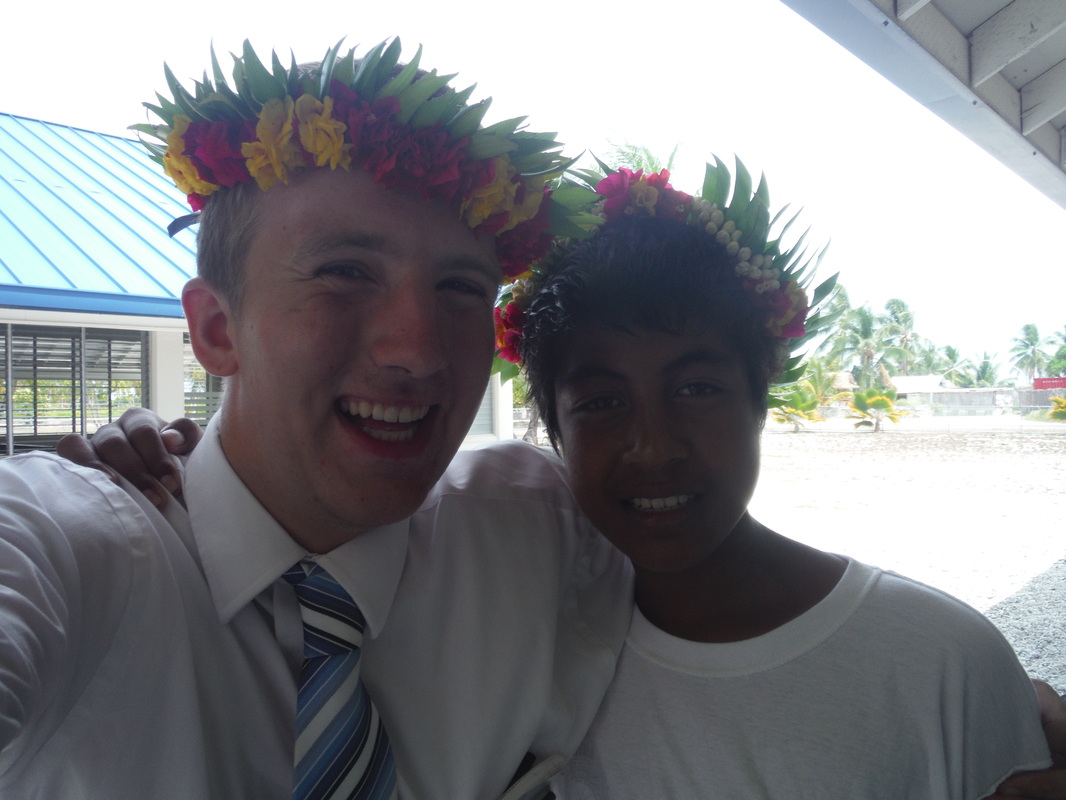 This is Franji, one of Spencer's friends in Kiritimati. 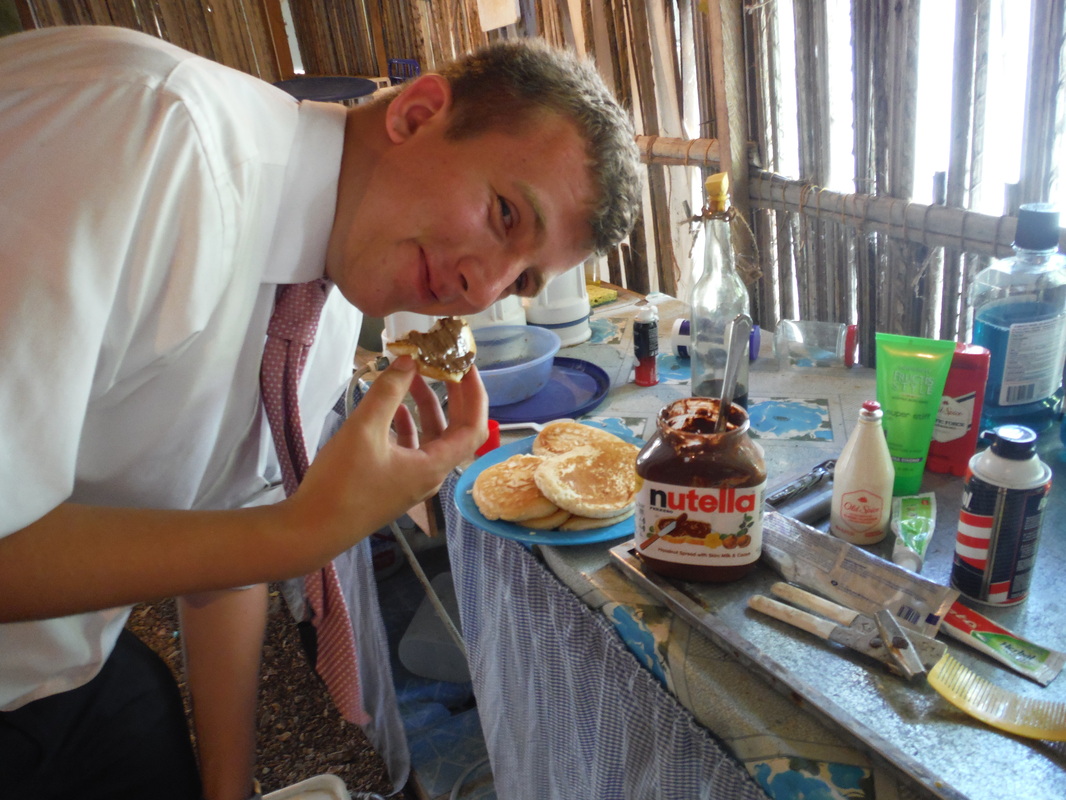 Spencer says this is a "traditional" Kiribati breakfast.  I think he may have meant "typical."  The Old Spice doesn't seem very appertizing, though. 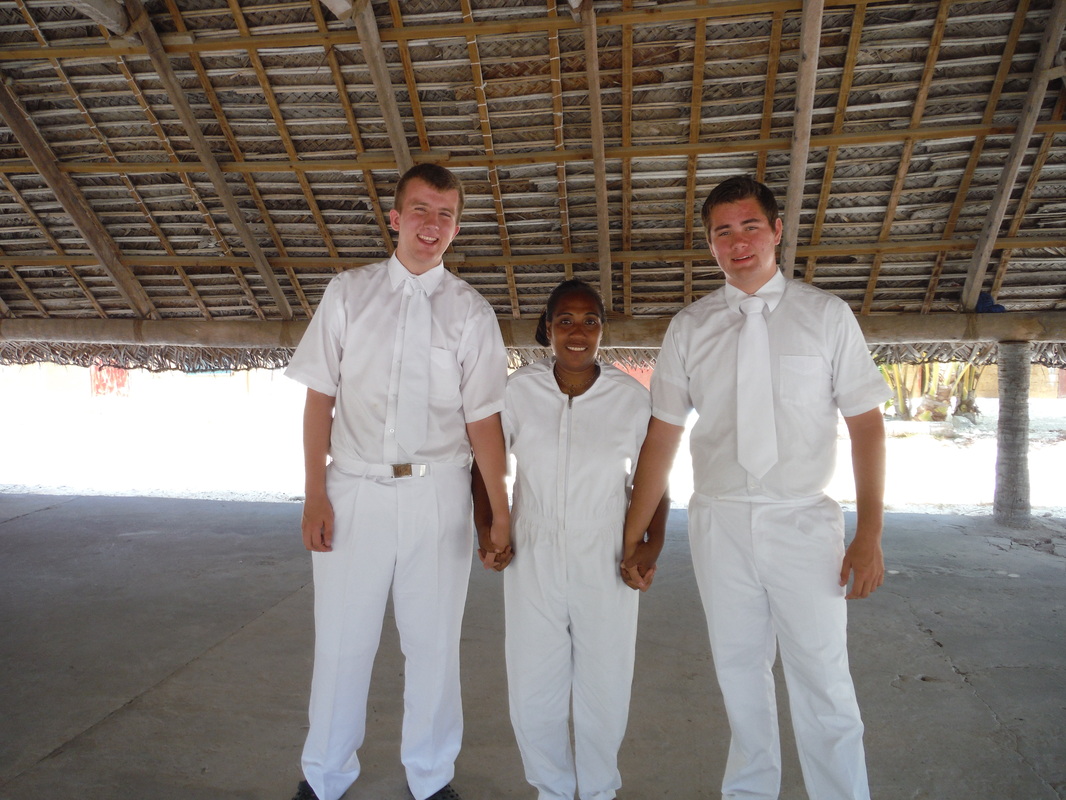 This is Raetenga, the first person Spencer baptized.  It sounds like she's a pretty special lady. 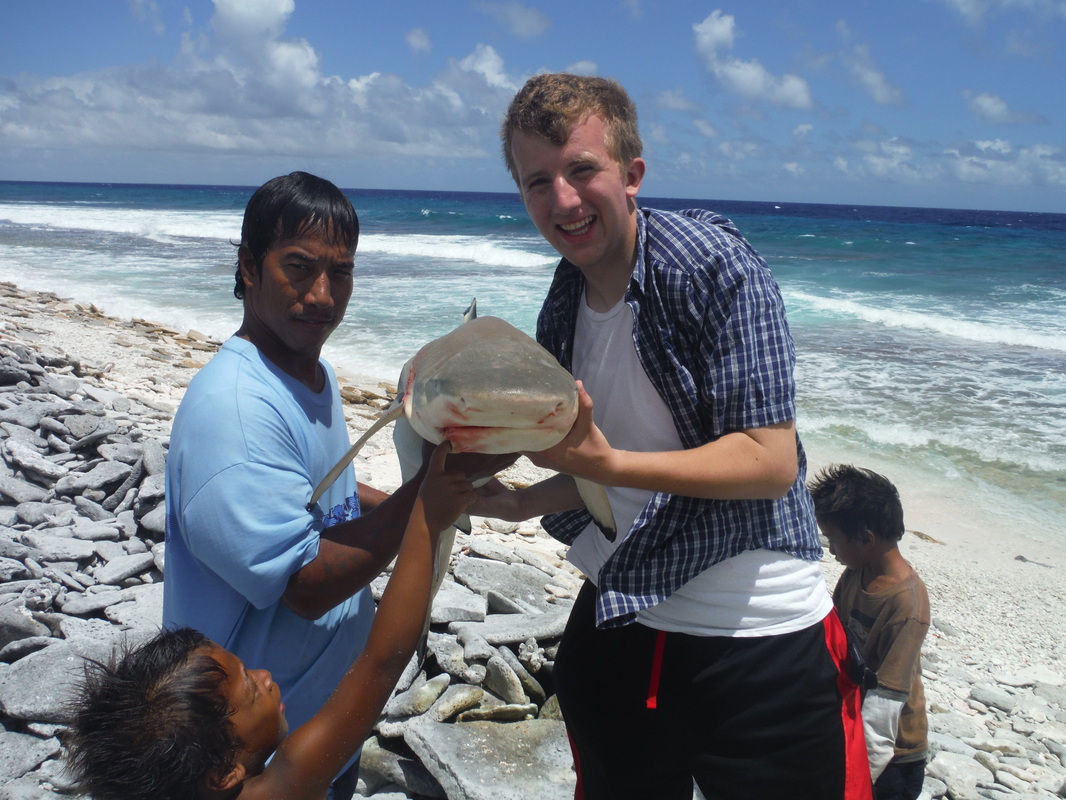 Here's the shark Spencer was talking about in this story:


Not many cool stories from this week, but the shark! Here's how it works. You put out a line with a great big hook and some dead fish on it. (We did this from the shore, because we aren't allowed on private boats.) Then you take a bunch of OTHER dead fish, and put it in the water. The shark smells it and comes looking. He munches on various dead fish, enjoying his free meal, when all of a sudden, he sees one slightly bigger than the rest. "Ah, ANNE bon te ika bwa i kan ni kana!" he thinks, being from Kiribati. So, since that's the fish he wants to eat, he grabs it. All of a sudden, he feels a big sharp metal thing in his mouth. "Ngkai, ngkai!" Yells the Kiribati man that is standing in the water, because the Elders aren't allowed. And the Elders pull with all their might, fighting and dragging the shark up the beach. Once it's well out of reach of the water, they drop large rocks on its head until it dies. This shark was about 5 feet long, and when we cut it open, it had four little baby sharks in it! Each about a cubit long, and still very much alive! So we performed a C-section on a dead shark, and set its children free into the ocean! They're tiny, and they could barely make it past the waves, but we gave them a chance! :) Yup, that's shark fishing. Tune in next time for another exciting episode! :) Loves!
Letter of December 2, 2013

[This letter was addressed to Sharon.  I've put most of it in here.  In her last letter Sharon had told Spencer about when her van tire went flat this week.  She had just whipped her handy-dandy air compressor out of her purse and fixed the tire on the spot. (OK, it was in the emergency kit--not her purse.)

It's good to hear about all the thanksgiving stuff! For thanksgiving,
we had a gallon of ice cream ($30) and Sister Anderson, our senior
couple missionary, made us an amazing chocolate cake. We all gathered
around our picnic table, had that, and talked about what we're
thankful for. Kiritimati is great, it's like a little family here. :)

One of the sisters, sister lavulavu, went around every single person
and said why she was thankful for each one of us. She told me that she
was grateful because I'm always singing. (Apparently, every missionary
here can hear me when I sing in the bathroom. And that's how they know
when I wake up every morning. And they all were like, "oh ya, we hear
you all the time!" And here I thought that was my little bastion of
privacy... Oh well! I can't NOT sing. :P)

Of course you have an air compressor! :) Gosh, I love you. :) We
got a flat tire too! And guess who was the one who knows how to change
a tire? (blows on fist, brushes it off.)

We had one spare, but our problem is, there isn't a single tire our size on the island. There
should be one by the end of the year. So we're being very careful with
the car. :)

This week has actually been a lot better. We've kinda figured out how
to work together, and so we're making a comeback with Banana. Elder
Sias and I had an ABSOLUTE MINIMUM goal of 25 lessons a week, and we
usually got between that and 30, because there was loads of craziness
and our Wednesdays were usually worthless. This week, Elder Wells and
I got 24 (would have had 26, with the extra two being member presents,
but there was a freaking preschool graduation that EVERYBODY went too,
blargh) which is way better than we've been doing! (Last week we got 7
lessons). And once we live out at Captain Cook, we'll be able to do
more! (Did I tell you the Captain Cook story? I'll tell you next week
if not.)

I have a favor to ask. Turns out, we pretty much just wear crocs out
here, because the other sandals take too long to get on and off. My
crocs are starting to get a hole in the bottom of one, and you can't
really buy them here. Could you send another pair? I'd appreciate it
greatly.

Anyway, as always, I'm learning loads about faith and trusting the
Lord! God is good!  I've been strengthened in my times of trial, and
every day I learn more! And I'm learning how to learn even more! :)

READ YO BIBLE!!!!! BOM is dang important, but there's a ton in the
Bible too! I don't know how I've gone my whole life reading the
scriptures as little as I have! Truly mind-blowing.

I love you, Mom, and I love everybody else back there too! Really
looking forward to being able to call home! It's looking like internet
here might actually be cheaper than telephone, so we might by skyping
home, how would that be? :) Thanks for the prayers, and thanks for the
email! I appreciate it all! Love you loads! :)

PS - demonstrated my old man voice to my comp in the house the other
day. The district leader heard, and turned around, quite startled.
Very satisfying. :)

PSS - You should have one of the twins tell Tell to get his mission
call, or I'm going to be married by the time he gets back! And once he
gets it, he needs to tell me! Thanks!